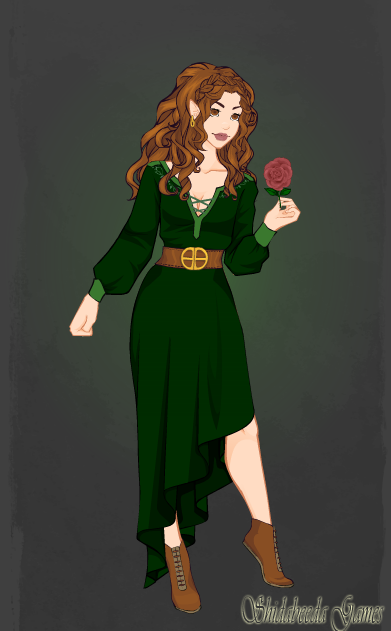 Rhiannon is a 24 year old lightfoot halfing with reddish brown hair and hazel eyes. As a halfling, she’s very agile and good at not being found when she wants to be alone. She is charming and has no problem getting people to like her, although she often disconcertingly knows things that she shouldn’t. Her poetry tends to be about nature, love/the lack thereof, or (if you can get her to recite while she’s drunk) the daring escapades of halfling heroes.

Rhiannon grew up in a small community just outside Teonne in a large extended family. Rhiannon was a little bit of a prankster when she was younger, and as she grew older she became more daring. When Rhiannon was a teenager, the townspeople began questioning why small valuable items were going missing and how family secrets were suddenly being discovered and spread around town. Around this time, Rhiannon coincidentally grew tired of her small town and persuaded her wealthy and indulgent parents to the Bardic college in the capitol city to pursue her passion, poetry.

After completing her studies, she was loathe to give up her independence and remained in Teonne, taking a position as a barmaid in a popular tavern on the outskirts of the city. She performed her poetry whenever the tavern management allowed her to (usually whenever a more well known performer canceled their engagement on the tavern stage). Her charm and unusual insight led to a steady stream of customers pouring out their troubles to her, which in turn led to a side business in relationship advice, matchmaking, and ghost writing flowery love letters for the unpoetic. Rhiannon quit the tavern and began working on Romance in Bloom full time.

Shortly after she turned 23, Rhiannon received a letter from her favorite cousin, Cynthia Cherrywood, who was currently the mayor of Rhyryburg. She was in need of an assistant gardener and fondly remembered the flower garden they had tended together as children in their hometown. Deciding that a change of scenery would be nice, Rhiannon closed her business and journeyed to Rhyryburg. She has been there for a year, happily overseeing the local flora and befriending the locals. She writes poetry for the harvest festivals and indulges in a little subtle matchmaking.

Rhiannon successfully oversaw her first harvest festival, which she named the Nuptial of Nuts in an attempt at humor that the townspeople unfortunately latched onto with enthusiasm as a serious name. During the preparations for the festival, which were met with unforeseen amounts of danger, she journeyed and formed an adventuring company with Artur Hawkwing, Kvothe, Shirak, and Athas Eridor (a monster hunter whom the group met on the road and who is currently staying in Rhyryburg).

Rhiannon was incapacitated for several days after an attempt to save Athas from a mind-controlling plant backfired. She fell under its spell as well, and when her companions restored her from her plant-zombie state she woke up to find that Cynthia had been killed by an animated sword and as Cynthia’s second in command, she was now the mayor. Her new position of leadership has put a halt to her adventuring, and she is currently attempting to manage the many problems that have cropped up as a result of Rhyryburg’s recent run of bad luck. 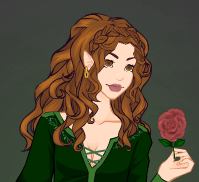